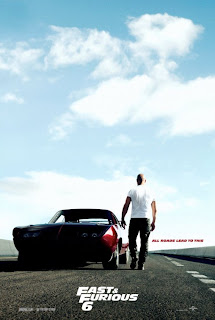 This movie had absolutely every single thing one could ever possibly ask for in a Fast & Furious movie* and thus I greatly enjoyed myself.  Everyone is up to their old tricks, everything moves in a fast and furious manner and every single part of the movie was great fun, especially recounting in dramatic fashion to the boyfriend, who despises these movies.  Which is to say, if you need me to convince you to see this, you are not already a fan and shouldn’t see it, but if you are a fan, you already have seen it.

*Includes: stunts that defy every law of physics; people returning from the dead who are not zombies but nearly fully healed people; massive plot holes; Vin Diesel mumbling important lines**; plot points that are laughable at best; a street race IN LONDON, ENGLAND; Gina Carano wearing very low-cut shirts; super cool hand-to-hand combat (because they can’t just drive well, they can also fight, goddammit); jokey dialogue that is funny; funny dialogue that is supposed to be serious; cars traveling through fire; cars being destroyed every which way but loose; incredible lapses in time; and our team having absolutely no problem adjusting to the fact that the steering wheel is on the other side of the car!

**Watching a certain scene in this movie, I am quite interested in seeing if Mr. Diesel could pull off the lead in a dramatic love story kind of movie.  I think he could.  Thoughts?