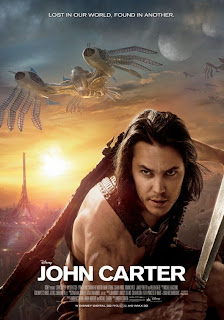 My main problem with this movie was the various things that populated Mars were all too cute.  My secondary problem was that it was rather long and boring.  My third problem was that Taylor Kitsch was pretty much Tim Riggins* on Mars**, which was rather disappointing from an acting perspective.

Cost:  free from Library, thank god.
Where watched: at S. North’s house, where I ate delicious popcorn as well as ice cream with strawberries and chocolate, which pretty much made up for the sad state that was this movie.  No wonder that executive lost his job.

*for those of you who haven’t been indoctrinated, Tim Riggins is a character on Friday Night Lights.
**At one point, I couldn’t help myself and yelled “Texas Forever”*** after John Carter’s big speech.
***That would be a Tim Riggins saying.