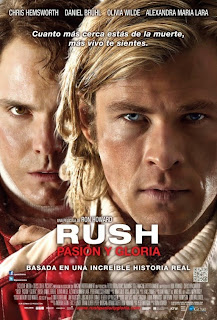 poster from: http://www.impawards.com/2013/rush_ver3.html
I went with this poster because the US version only has Chris Hemsworth on the front.  Because those marketing people know their audience.  But Chris Hemsworth–as enjoyable as his dreamy looks and massive physique and incredibly deep voice is/are–was not the star of this movie, Daniel Bruhl was.  Watch it and see if you disagree with me.

*Aside from Parenthood and this film, I find all Ron Howard movies a bit draggy in the middle.