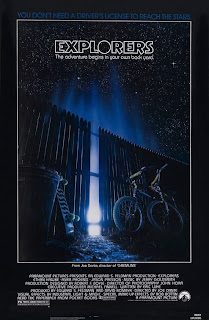 This was a great favorite of my mother, brother and I when I was 11 and so in the present, I was happy to realize that it stars not only a very young River Phoenix, but also a very young Ethan Hawke.*  It’s still a very sweet film, worth watching for it’s totally 1985 computer generated effects and copious pop culture references.  It’s a great movie for the 8-12 year-old in your life and you, the adult might enjoy it too.

Cost:  free from library
Where watched:  At home while endlessly basting material together.

*Jason Presson, the other guy in the movie was my favorite actor of the three, at least during this viewing.   His acting was pretty contained and had the most amazing voice.  Ethan Hawke’s voice was still quite high and really bugged me by the end, but Jason Presson, since you don’t seem to be acting anymore, I hope at least you are a radio DJ or doing something with that great voice.  [one Google search and 10 minutes later, here’s a picture of him from 2008 and a bit about what he’s doing now. http://americanvirus.com/2008/08/americanvirus-30-jason-presson-on-hollywood-boulevard/]