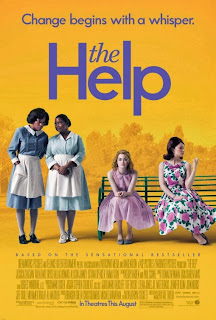 About three-quarters of the way through this movie the thing I was enjoying most about the film finally became clear to me.  I love that this was entirely a film about women, so much so that there were really no men present.*  Those fabulous actresses, so often relegated to the girlfriend/whore role,** just got to sink their teeth in and do some damn fine acting.***

Cost:  free from library.
Where watched: at home.

*In nearly every other book-to-movie transitions the fleshed-out female character is shunted aside for the men to take center stage.  I’m looking at you, Gone Baby, Gone.  Here, the men, much more present in the book, were almost completely eliminated.

**And yes, the black women were stuck being the maids AGAIN.  So frustrating!  I’m holding out for a future where we not only have many movies with fully-developed female characters as a matter of course, but also movies where the people of color don’t have to disappear into the standard tropes of servant/cannon fodder/magical guides for the white people.

***Bryce Dallas Howard was something of a marvel.  “Who is that woman playing Hilly?” I kept wondering.  And then was aghast it was she, who I had always kind of written off.